When the Saints Come Mulching In

Saint-Gobain is putting down new roots and reaching new heights at its North American headquarters in Malvern. In the spring of 2017, the company partnered with Triskeles in an effort to address food insecurity in our region. As the newest member of the Food For All program, Saint-Gobain worked with Triskeles to establish a large raised bed garden with the intention of donating at least 50 percent of the harvest to local pantries, taking their commitment to sustainability and social responsibility to new levels. We welcome their partnership!

We recently had an opportunity to sit down with a few of the gardeners from Saint-Gobain who worked to establish the garden in 2017 and asked them a few questions about themselves and their efforts. 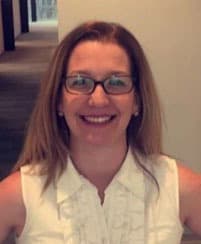 Colleen Sgarra is a Payroll Specialist who has been with Saint-Gobain since 2016. She has fond memories of helping her parents in the garden as a child. Now, as a mother herself, Colleen is carrying on that legacy by sharing her gardening experience with her five children.

What motivated you to participate in the garden?

CS: It was my first year working for Saint-Gobain, and I didn’t know a lot of people. When I saw that there was going to be this beautiful garden space, I couldn’t believe I had this opportunity. I thought it would be better than sitting at my desk or in the Café and that it might give me a chance to meet people in different departments, which it did. That was huge. I never would have met half of these people if I didn’t participate in the garden. That’s just me. The fact that I am helping other people, other families, that felt really hands-on and made me feel like this is something truly special.

You found that connection between your gardening and the recipient pantries to be meaningful?

CS: Absolutely. I have a big family myself and I know how much it costs to go grocery shopping, especially if you want to buy healthy things, which can be tough. You want to buy healthy food and that’s even more expensive. So for me, I’m at work and I’m able to give some time that can help another family in need, a family that is local, that’s just amazing.

Was there anything that surprised you about the 2017 garden season?

CS: How much we grew, and how well the crops did! It was such a positive experience, and I learned a lot, which was neat, too, because I can take that knowledge and use it to benefit my own family. I really appreciate learning new things that I will be able to use and pass along to others.

CS: Getting more people involved! Maybe we could grow some new crops, or fruit trees, but getting a chance to continue learning and doing some good. 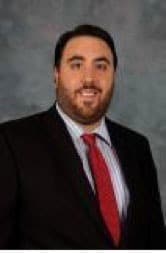 Miles Miner is a Lead Accountant in the Shared Service Accountant Department who has been with Saint-Gobain for three years. Miles has been growing as a gardener for seven years, with memories of his grandfather’s garden helping him to envision his own personal sustainability in the years to come.

Miles played an instrumental part in establishing the garden, and his leadership both in and out of the soil added 720 lbs. to the final harvest and impacted more than 2,700 meals.

Tell us a little about your garden at home.

MM: Right now I am spawning mushrooms, and I have a couple of fruit trees that we’re getting started. We are currently laying out the footprint for our permanent garden to determine how we want it to be in the years to come.

You played a big role in the push to get the garden established here, along with Karen Steele and many other dedicated people. This was a significant investment for your company and its employees. Why do you think Saint-Gobain did it?

MM: I believe Saint-Gobain saw an opportunity to make an impact on our community in Chester County; that we could stand out in our area and show the different ways we are helping our local community. I think it shows that Saint-Gobain is a caring community partner. They want what’s best for our neighbors.

Was there anything that surprised you about the 2017 garden season?

MM: There was a moment in the beginning when there was a lot of stress with getting the garden established. During a conversation, someone was venting their frustration and I was able to point out that in the midst of the chaos we had harvested more than 300 lbs. of fresh organic produce for donation to community members in need, and it completely changed the nature of the conversation. The response was, “This is the best thing I have ever been involved in.” To see it go from frustration to joy so quickly made a big impression on me.

MM: I’m really excited for the ways that we can expand our footprint and work to make it look nicer and also increase our production.

Lynne Watt is a Manager with Risk Management who has been with Saint-Gobain since 2005. She grew up helping her mother with beautiful flower gardens and English cottage style gardens, and as an adult she became interested in vegetable gardening. Her participation in the garden at Saint-Gobain encouraged her to install two small raised beds at her home, and she is planning on adding more this year.

Through her participation in the Saint-Gobain garden in 2017, Lynne added 432 lbs. of produce to the final yield and impacted more than 1,600 meals.

Can you tell us what motivated you to participate in the garden at Saint-Gobain?

LW: Well, I’ve always had an interest in gardening, and the year prior I was part of a smaller effort to do a garden here. When the initiative began to partner with Triskeles and Food For All, I was really excited. It was something that interested me and gave me a chance to be more engaged with my coworkers. It just makes the time that we spend together here better.

Was there anything that surprised you about the garden?

LW: When the program was introduced, it coincided with the time my youngest daughter was a senior in high school. She had to do a senior project and started to volunteer at our local pantry. Hearing her stories of what she saw there, how we live in a fairly comfortable community but she didn’t realize that right here there are people, her peers in school and families in our area who don’t have enough food, it was startling. Hearing about this made the Food For All program all the more significant for me. Being able to do this work in the garden while also helping other people, it’s very much a win-win situation.

Has working in the garden enhanced your work experience at Saint-Gobain?

LW: Absolutely, in multiple ways. Meeting people I never would have met before on this campus and getting to know them while we’re all on equal footing in the garden. Learning things that I can take away from the garden and apply in different areas. Being outdoors and engaged with nature has been a great stress reliever. I also believe it has helped me develop leadership skills and speaking skills as I have led my own team of gardeners and while interacting with the pantry.

As someone who assesses risk, can you apply your expertise to the impact of a garden on the campus?

LW: I think you could look at it a couple different ways. From a health insurance perspective, anything that the employees are doing that is more active, or eating healthier, or helping decrease their stress is going to have a positive impact on our health insurance. Many times employees become more prone to injury in the workplace because they’re distracted, they’re stressed, they’re not in the best physical condition, or they’re not eating healthy. The garden provides an opportunity to avoid some of those pitfalls, and it also helps people feel connected to their work family.

LW: I’m really interested in helping more people get involved in the garden, and I’m excited to see what we’re going to grow this year. 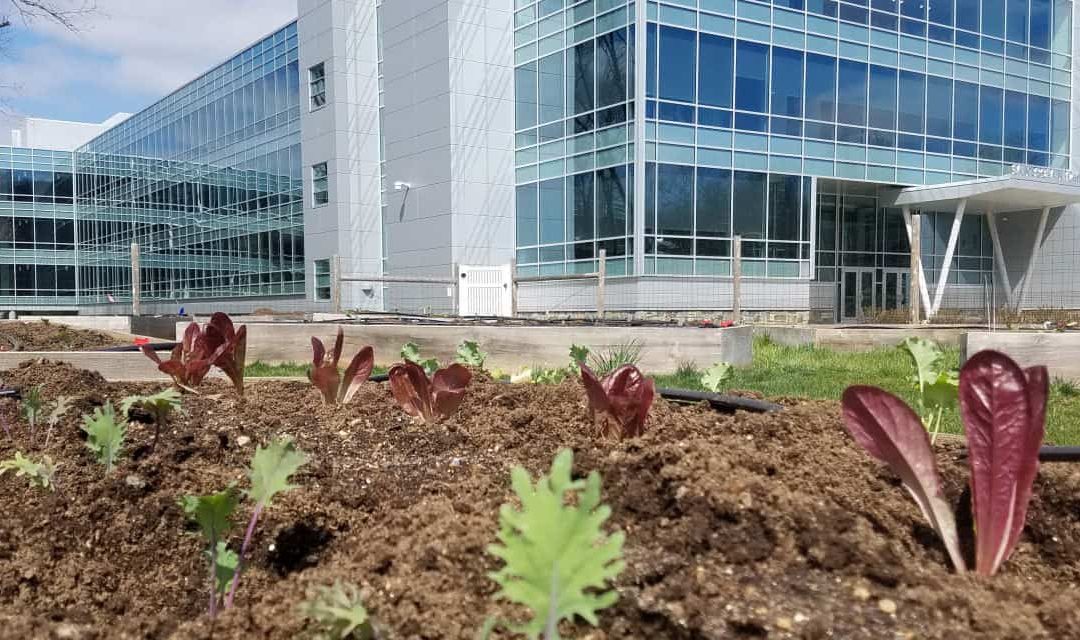 Triskeles is pleased to present Saint-Gobain with its Initial Impact award. This special recognition highlights and celebrates Saint-Gobain for the company’s outstanding achievement during their first year in partnership with Triskeles and the Food For All program network.

In the spring of 2017, the Saint-Gobain Foundation worked with Triskeles to establish an attractive 20-bed garden at the company’s North American headquarters in Malvern, complete with deer fencing, drip tape irrigation and a garden shed. Few could have anticipated the bounty that would come from the first year, or how their investment in the garden program would produce such a windfall for recipient pantries in the area.

Colleen Sgarra, a Payroll Specialist with Saint-Gobain, worked in the garden last year and made regular deliveries to a partner pantry in Paoli. “The people there are amazing, and so appreciative. Every time I would go there they would tell me, ‘You don’t understand how important this is. You’re feeding so many families.’” Sgarra added, “Doing that kind of good makes you feel really wonderful.” 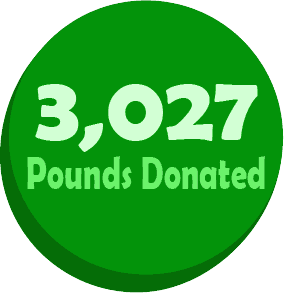 The 25+ committed volunteers from the Saint-Gobain community worked to bring in a staggering harvest of 3,731 lbs., a per-bed average yield of 187 lbs., almost double the program-wide average. Determined to exceed the 50 percent required donation, the gardeners at Saint-Gobain built relationships with partner pantries in the area and donated 81 percent (3,027 lbs.) of their fresh organic produce to benefit neighbors in need.

“It’s great to see what a difference the produce makes for the recipients,” said Lynne Watt, a Manager in Risk Management with Saint-Gobain. Watt also had an opportunity to develop a connection with a partner pantry. “I could hear people talking excitedly about the produce, and having a chance to shop between multiple types of produce because we were donating enough to give people options, which is incredible. When I spoke with the director at the pantry she told me, ‘Getting this produce, for many of our clients it’s like Christmas.’”

The partnership between Triskeles and Saint-Gobain has had an immediate and meaningful impact on hunger and food insecurity in our community, and provided employees with new opportunities for development within their work environment.

Miles Miner, a Lead Accountant in Shared Services, was instrumental in establishing the garden and saw in it a chance to grow not only organic produce but a new set of skills as well. “I wanted to have a direct impact on the community and to continue honing my own growing skills. It gave me an opportunity to develop a leadership role, and I definitely believe it has been a benefit to my own career development,” Miner said. “I saw an opportunity to align my efforts in the garden with the attitudes Saint-Gobain promotes as part of our corporate culture.” 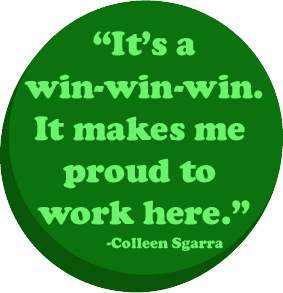 Miner added, “I think it shows that Saint-Gobain is a caring community partner. They want what’s best for the local community.”

“You’re doing something which helps other people and affects your own well-being, and that reflects well on the company, so it’s a win-win-win,” noted Sgarra. “It’s a good feeling. It makes me proud to work here.”

It’s a partnership that Triskeles is proud of, too, and we’re happy to recognize Saint-Gobain for their incredible Initial Impact!